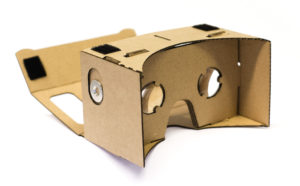 A Google Cardboard let’s you view immersive 3D 360° content on your smartphone.

Virtual reality and 360° content is one of the hottest trends in social media in 2016. Facebook recently introduced the ability for anyone to upload and view 360° content, while Google-owned YouTube is seeing a sharp increase in 360° and 3D content, viewable with the low-cost Google Cardboard VR Viewer.

Social Weaver worked with CueMedia at the 2016 National Arts Festival to produce a number of 360° Festival videos – watch them here. In addition, we offered a free workshop at the festival, demonstrating how to shoot, edit, view and share your own immersive 360° content.

Attendees had an opportunity to try out our Ricoh Theta S 360° camera and Google Cardboard VR viewers and were inspired by the potential that this exciting immersive tech offers for much more engaging content experiences. The School of Journalism and Media Studies at Rhodes University wrote up a comprehensive piece about the workshop – read it here.

If you’re interested in exploring the potential for 360° content for your business, please take a look at our Storytelling services – let’s make magic!